Three Years Research and Writing Over

This blog may have lain idle, but I certainly haven't. I discovered that researching and writing the story of the Palmerston North Municipal Baths demanded more time than I imagined. For more than twelve months I've spent several hours most days either researching or writing the book, leaving no energy left for blogging.

However, writing this story has now come to an end. The book is finished, the story is told and in another two months Down at the Baths will be launched. It's time to return here and share some of the story with you.

This photo was taken in the late 1950s by the custodian of the time, Wes Hayward. For any public facility such as this to have a story to tell, people are needed. The custodian has prepared the baths for a swimming carnival and they sit waiting for the swimmers and officials to arrive.

The baths story unfolded over nearly 50 years, between opening in 1917 and closing in 1966. The story could be that of any swimming facility from that era. 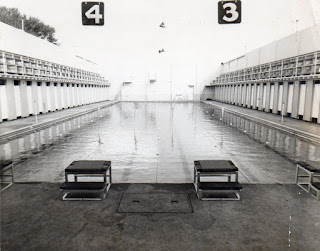 Maybe this will remind you of your own local baths or swimming pool? I'd love to hear of your experiences.
Posted by Unknown at 10:32 PM